Things I Know to be True

For assistance booking special access seats or for information about our Accessibility Services, please call 1.800.461.3333. 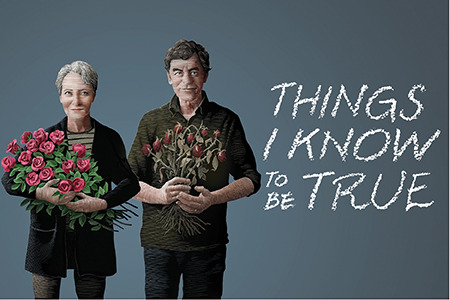 A heart-wrenching and uplifting journey of a family struggling to stay together in a rapidly changing world.

David Mirvish and The Company Theatre, one of Toronto’s most acclaimed independent theatre companies, present the Canadian premiere of Andrew Bovell’s Things I Know to be True.

A poignant family drama with universal resonance, Things I Know to be True is the story of a year in the life of the Price family. Bob (Tom McCamus), recently let go from his job at a car factory, and Fran (Seana McKenna), a registered nurse, have raised their four children — Pip, Mia, Ben and Rosie — the best they could.

Now in their 60s, their children grown, they should be slowing down and taking time to smell the roses and enjoy a job well done. But a parent’s job is never finished, and as the seasons change, Bob and Fran find themselves guiding and supporting their children as they each face life-altering changes that shake the foundation of the once-stable family home.

With insight and humanity, Bovell has tapped into the poetry, beauty, and tragedy of everyday life to create a deeply moving play that will resonate with anyone who has ever been part of a family.

Andrew Bovell is one of Australia’s most acclaimed playwrights. His plays include Speaking in Tongues and When the Rain Stops Falling.

Founded in 2005, The Company Theatre has produced some of Toronto’s most memorable productions over the last fifteen years, including the Canadian premieres of Bruce Norris’s Domesticated, Annie Baker’s John, and most recently the multiple Dora Award-winning production of Jez Butterworth’s Jerusalem, starring Kim Coates.