Come From Away Timeline

It took almost a decade from conception for Come From Away to become an international smash hit. That’s about average for a musical, which is considered to be among the most complex of theatrical forms to create because it relies on many different layers of collaboration amongst a small army of artists. For the sake of brevity, the timeline here is focused mostly on the show’s Toronto life. 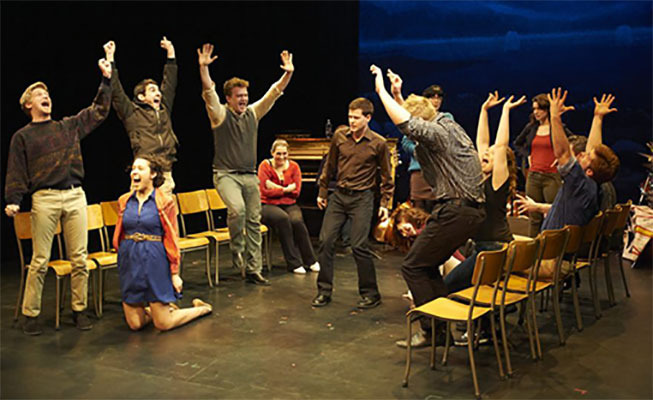 In 2009, after attending the first musical by Irene Sankoff and David Hein, My Mother’s Lesbian Jewish Wiccan Wedding, Michael Rubinoff, now Producing Artistic Director, Canadian Music Theatre Project at Sheridan College in Oakville, ON, approached Irene and David with the suggestion that they consider making a stage musical of the story of the airplane passengers who were stranded in Gander, NL, after the 9/11 terrorist attacks. In 2011, Irene and David travelled to Gander for the tenth anniversary of the attacks.

They met both the locals and the “plane people” (also known as “come from aways”). The couple used the material they gathered to shape an early version of Come From Away that was workshopped at Sheridan College’s Canadian Musical Theatre Project in 2012. A revised and expanded version was produced by Sheridan College and performed by the students of the college’s Musical Theatre program in winter 2013. The musical was further developed that summer at Goodspeed Musicals in East Haddam, CT. In the fall of the same year it was showcased at the National Alliance for Musical Theatre's Annual Festival of New Musicals in NYC, where it was optioned by the Broadway producing company Junkyard Dog Productions. 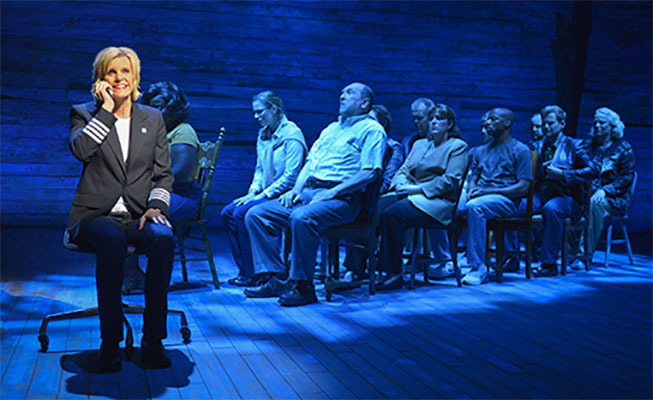 The first fully staged professional production of Come From Away was co-produced by La Jolla Playhouse, where it played May 29 – July 12, 2015, and Seattle Repertory Theatre, where it played Nov 13 – Dec 20, 2015. Directed by Christopher Ashley, the production was both a critical and financial success, breaking box office records at both theatres. Junkyard Dog announced a transfer of this original production to Broadway.

The musical played a pre-Broadway engagement at Washington’s Ford’s Theatre, running Sept 2 – Oct 16, 2016. The next pre-Broadway engagement was planned for Toronto’s Royal Alexandra Theatre. But prior to this, it was important for the community that had inspired the musical to see it. The Broadway-bound company adapted the show into a concert version and travelled to Gander to perform two special benefit concerts at the local sports arena on Oct 29, 2016. 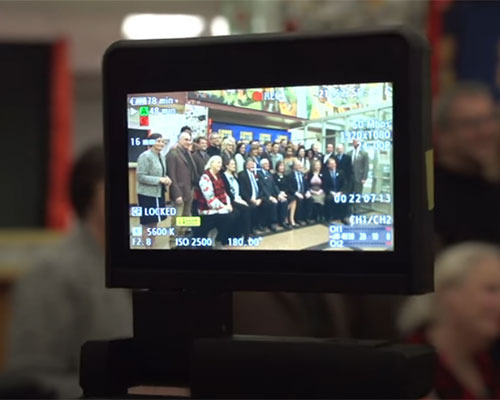 The pre-Broadway full production had its official Canadian engagement from Nov 15, 2016 to Jan 8, 2017. The musical reopened the historic Royal Alexandra Theatre after it had undergone a major six-month renovation and restoration. The run was a resounding success, receiving rave reviews and breaking box offices records again and again at the 109-year-old theatre.

The demand for tickets was so intense that standing room locations at the back of the orchestra level were instituted and extra performances added. It was obvious that Toronto audiences demanded even more performances, but the company was booked to play Broadway. Discussions began for the show to return to Toronto. 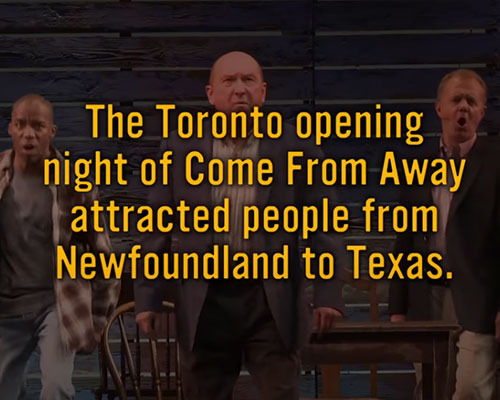 Moving to New York, Come From Away began performances on Feb 18, 2017 and officially opened on Mar 12 at Broadway's Gerald Schoenfeld Theatre. Again, the response was astounding. The production was showered with great reviews and intense demand for tickets. Prime Minister Justin Trudeau bought hundreds of tickets to entertain dignitaries and trade partners and to showcase the Canadian spirit and ethos the musical celebrates. Director Christopher Ashley was awarded the Tony for best direction of a musical.

The show continues to play an open-ended run—of course, interrupted by the Covid-19 pandemic on Mar 12, 2020, but the show will reopen once it is safe to do so.

Take in the Broadway video series! 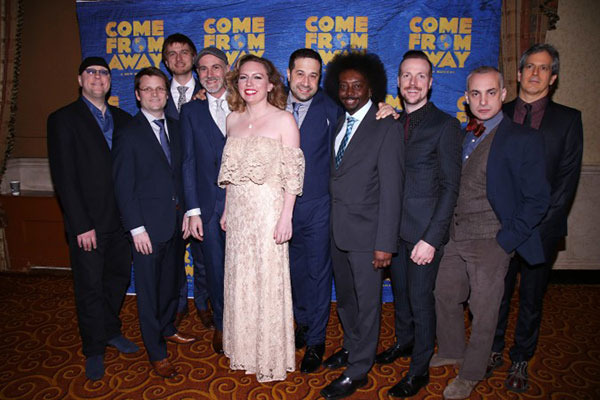 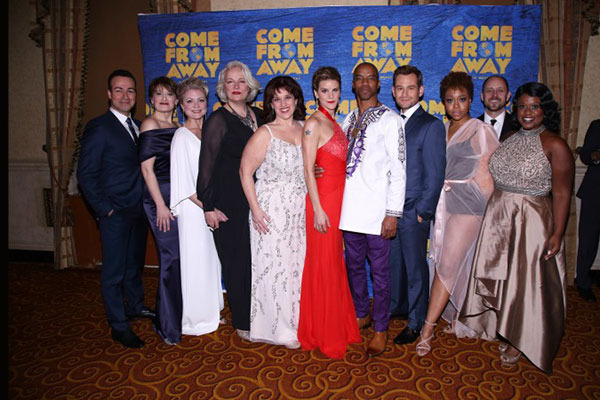 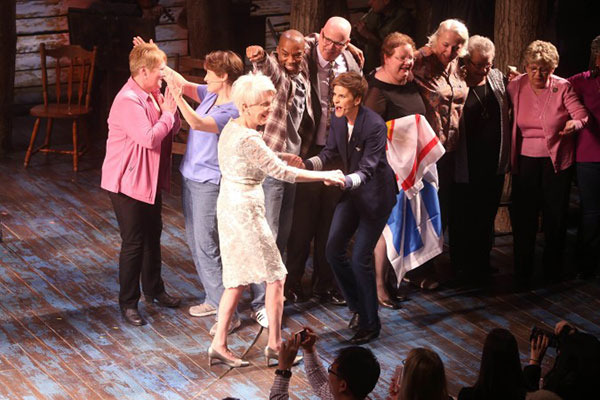 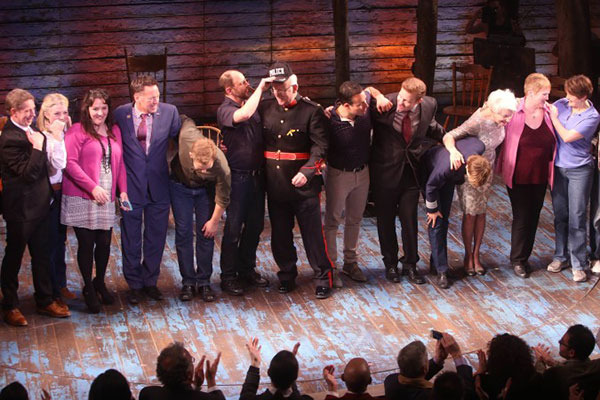 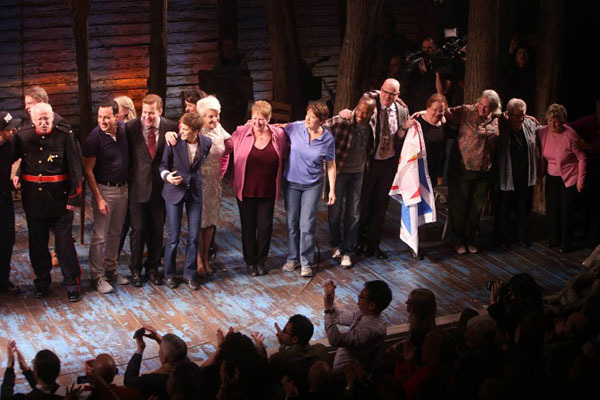 Due to the extraordinary success of the show’s original Toronto run, the producers decided to start a second company of Come From Away in Canada. The production would have an engagement in Winnipeg before opening in Toronto. On Nov 30, 2017 the all-Canadian cast and the creative team welcomed members of the media into their rehearsal room at Wallace Studios for a traditional meet-and-greet. The cast performed a couple of numbers from the show before taking part in several interviews. 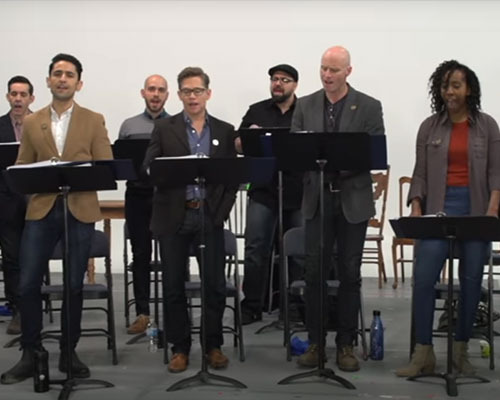 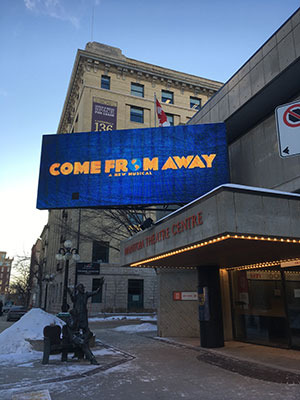 Returning from Winnipeg, the new company settled into the Royal Alexandra Theatre. Performances began on Feb 13, 2018. This new engagement was even more popular than the original, with tickets sold-out at least six months in advance. 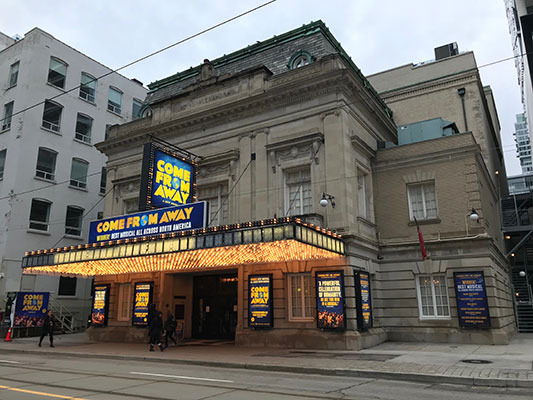 When Newfoundlanders want to initiate non-Newfoundlanders (also known as “come from aways”) into the island’s gregarious culture, they perform a ceremony that includes many of the culture’s unique rituals – downing a shot of screech (a high-alcohol Jamaican rum blended and bottled in Newfoundland), kissing a cod (the fish that has defined the island forever), and reciting a short speech full of local expressions in answer to a few questions ("Are ye a screecher?" or "Is you a Newfoundlander?,” with the proper response being, “Yes b’y. Indeed I is, me ol' cock! And long may yer big jib draw!”).

For the new Toronto company’s screech-in, the former mayor of Gander, Claude Elliott, officiated. But when it came time to actually kiss the real cod on the mouth, some cast members were a little hesitant. 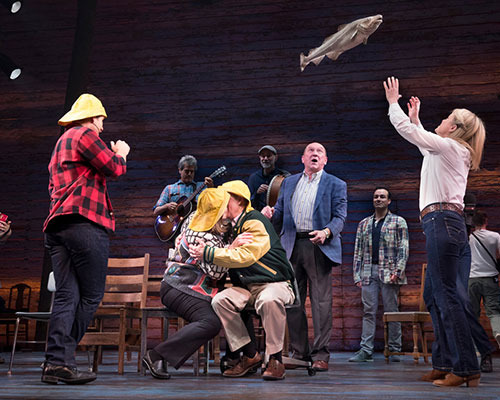 After a week of preview performances, the new company opened to the media and invited guests on a cold, brisk but sunny Sunday afternoon. In the audience were many of the real-life Newfoundlanders who are portrayed in the show, along with the some of the original “plane people”. The response was just as thunderous as it had been 16 months earlier. This new company was a hit. 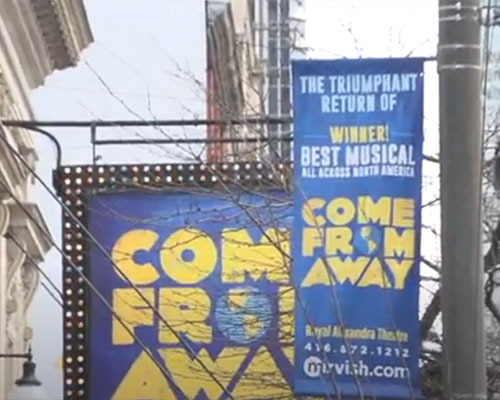 Come from Away celebrated its 100th performance in Toronto. Creators Irene Sankoff and David Hein were on hand to present the cast with a cake commemorating the milestone. 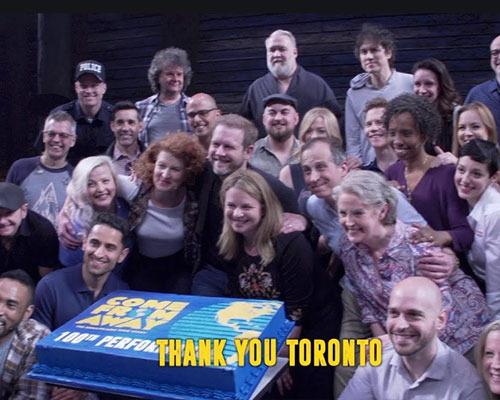 Due to the extraordinary success of the Royal Alexandra run, the show closed there on January 20, 2019 and prepared to move a few blocks east to the Elgin Theatre. While the show’s sets were being moved to the Elgin, the company had the opportunity to return to Newfoundland and perform a concert version of the show in St. John’s at the Holy Heart Theatre, January 23 – 27, 2019. While in Newfoundland, the company also visited Gander for two days. 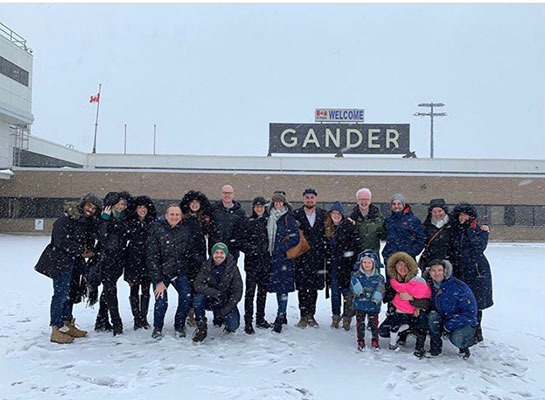 The company returned to Toronto and began its run at the Elgin Theatre on February 5, 2019. 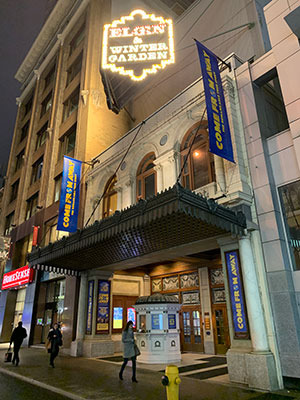 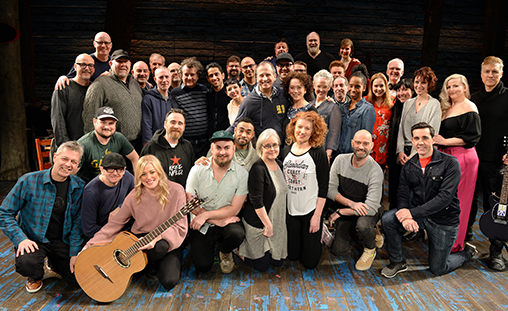 Come From Away celebrated its 500th performance in Toronto with a giant cake, and producer Randy Adams on hand to say a few words. 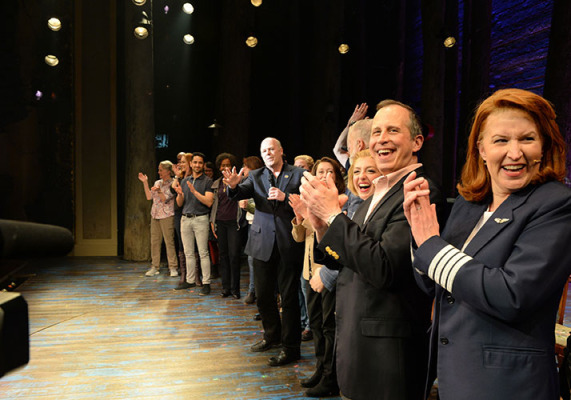 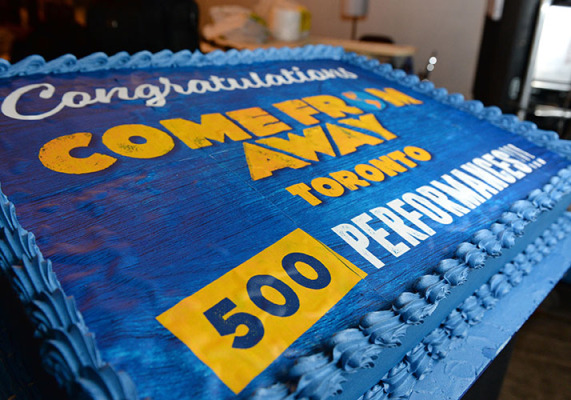 On Saturday, December 7, 2019 the cast and musicians from Come From Away took over the main space at the Daily Bread Food Bank warehouse in Mimico to throw a holiday-themed kitchen party. The end goal was to raise much-needed funds for Daily Bread. But it was also an opportunity to break bread with many CFA fans and to spread some good cheer during the holiday season. 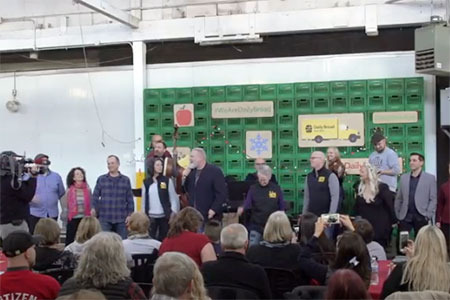 Return Home To The Royal Alex

The run at the Elgin Theatre ended and the company prepared to return to the Royal Alexandra Theatre on December 13, 2019. 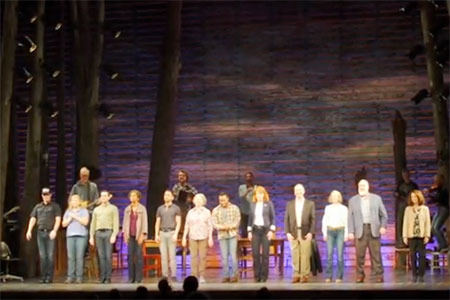 The Covid-19 pandemic struck, forcing all theatres to shut. The final Come From Away performance was on March 13, 2020. The sets and costumes are still at the Royal Alexandra awaiting the reopening of the theatres and the restart of performances. 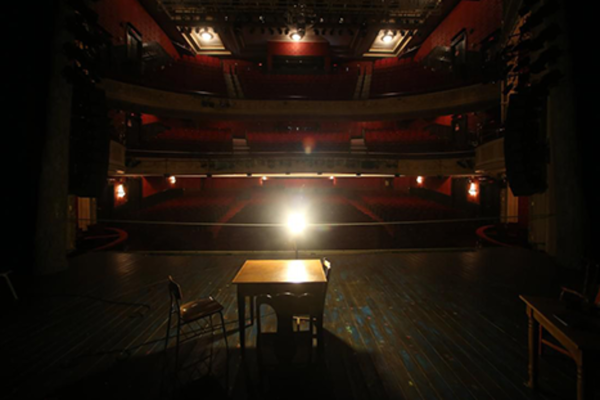 During the Covid-19 pandemic the company created a special Zoom performance of “Welcome to the Rock”. 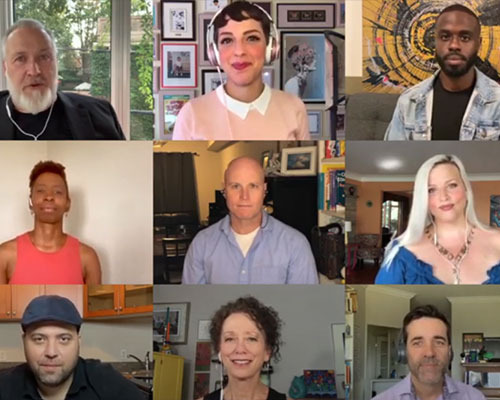 More On Come From Away

How Newfoundland hospitality inspired the Tony Award-winning musical Come From Away.

CRAVE/HBO - You are Here: A Come From Away Story

An intimate feature documentary about the community of Gander, Newfoundland welcoming the over 6,500 passengers who were forced to land after the terrorist attacks on 9/11.

THE REOPENING OF COME FROM AWAY

This was the first public performance of the hit musical since COVID-19 shut down public gatherings in March 2020. It had been 643 days since the show was last performed at the Royal Alexandra Theatre.

The cast and crew were overjoyed to tread the boards again, and creators Irene Sankoff and David Hein were on hand to celebrate. 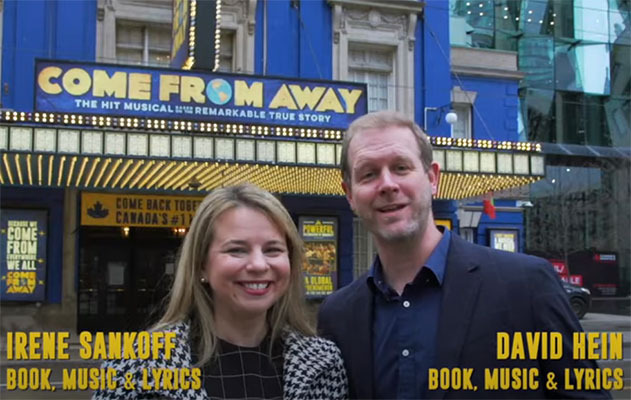 COME FROM AWAY CLOSES PERMANENTLY IN TORONTO

Seven days later, the Omicron variant drew the curtain on this production in Toronto. As a result, the most successful Canadian musical of all time permanently closed. After playing for 855 performances, the Toronto production of Come From Away ended its run on Wednesday, December 22, 2021 at the Royal Alexandra Theatre. 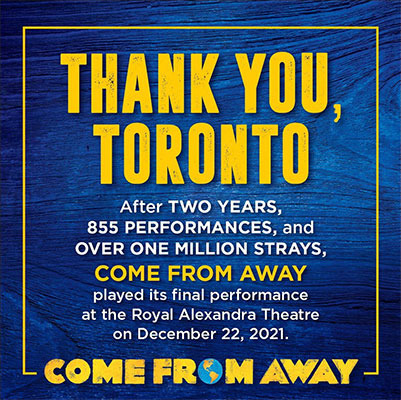