The Unauthorized Harry Experience - A Parody by Dan and Jeff

This production employs haze, strobe lights and loud noises. Suitable for ages 6 and up. Babes in arms or children under the age of two (2) are not permitted in the theatre. Children older than two (2) should be able to sit quietly in their own seats throughout a performance. 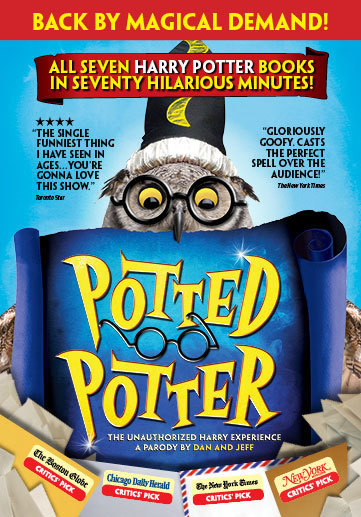 Returning to Toronto for the fourth time, Potted Potter: The Unauthorized Harry Experience – A Parody by Dan and Jeff takes on the ultimate challenge of condensing all seven Harry Potter books (and a real life game of Quidditch) into seventy hilarious minutes.

This fantastically funny show features all your favourite characters, a special appearance from a fire-breathing dragon, endless costumes, brilliant songs, ridiculous props, and a generous helping of Hogwarts magic!