NEW TO THE WIZARDING WORLD OR NEED A QUICK REFRESH?

HERE’S EVERYTHING TO KNOW BEFORE SEEING CURSED CHILD

Broadway cast of Harry Potter and the Cursed Child. Photo by Matthew Murphy.

Harry Potter was born on July 31, 1980. When the Potters are attacked by a Dark wizard, Lord Voldemort, Harry’s parents are killed, but baby Harry survives after the Killing Curse that Lord Voldemort casts rebounds, and the now-orphaned infant is left with just a lightning-bolt scar on his forehead.

The Dursleys - Aunt Petunia, Uncle Vernon and cousin Dudley - reluctantly take him into their family home, but don’t treat him as one of the family.

On his 11th birthday, Harry is visited by Hagrid who tells him he is a wizard and is invited to attend Hogwarts School of Witchcraft and Wizardry.

Catch up on the first 7 stories, learn handy wizarding world terms, and meet some of the key characters in the show.

JOURNEY TO THE EIGHTH STORY

Year One at Hogwarts

Harry Potter and the Philosopher’s Stone

On September 1, Harry boards the Hogwarts Express from Platform Nine and Three-Quarters at King’s Cross, where he meets his two future best friends: Ron Weasley and Hermione Granger. At Hogwarts, his new magical school, the three get sorted into Gryffindor, while a new enemy, Draco Malfoy, is put into Slytherin.

The Hogwarts staff, such as Professor Dumbledore, Snape and McGonagall, alongside kindly groundskeeper and half-giant Hagrid, shape Harry’s first year. In his final term, Harry comes face-to-face with a weakened Lord Voldemort, the Dark wizard who killed his parents, but escapes.

Harry Potter and the Chamber of Secrets

Dobby, a house-elf, visits Harry to warn him that danger awaits at Hogwarts. Harry goes back regardless. At school, a message on a wall says “The Chamber of Secrets has been opened,” and Muggle-born students start getting attacked.

When Harry’s classmates discover that he can speak Parseltongue - a rare trait often associated with Dark wizards - they suspect he is the heir of Slytherin and responsible for the attacks.

Harry discovers an old, magical diary by former-Hogwarts student Tom Riddle, and realizes that through it, Tom can possess Ron’s sister, Ginny, to open the Chamber, unleashing a snake-like creature called a Basilisk. After a confrontation in the Chamber, Harry learns that Tom is actually a young Voldemort.

Harry Potter and the Prisoner of Azkaban

Sirius Black, a wizard who has been imprisoned in Azkaban, escapes and is apparently pursuing Harry. Dementors, the soul-sucking guards of Azkaban, are stationed at Hogwarts to track down Sirius. The creatures affect Harry badly, who is taught the Patronus Charm by Professor Lupin to defend himself.

Harry is given the Marauder’s Map, which shows the entirety of Hogwarts and movements of everyone in the school. Soon, Harry learns that Sirius was wrongly convicted and is, in fact, his godfather.

Harry and Hermione travel back in time with a Time-Turner to save him (and a Hippogriff named Buckbeak), setting them both free from the Dementors’ grasp.

Harry Potter and the Goblet of Fire

Over the summer, Harry attends the Quidditch World Cup. After the match, the camp is attacked, and a skull-like symbol called a Dark Mark looms overhead - the sign of Voldemort. Back at school, the Triwizard Tournament takes place, and Harry and Cedric Diggory are chosen to represent Hogwarts.

During the competition, Harry and Ron ask Parvati and Padma Patil to the Yule Ball, while Hermione attends with Bulgarian wizard Viktor Krum, the champion from the Durmstrang school.

At the end of the final challenge, Harry and Cedric are tricked into touching a Portkey which transports them to a graveyard with Voldemort waiting. At Voldemort’s command, Peter Pettigrew kills Cedric, while Harry escapes. Dumbledore plans for war against Voldemort.

Harry Potter and the Order of the Phoenix

Harry meets the Order of the Phoenix, a secret society dedicated to defeating Voldemort. At Hogwarts, Dolores Umbridge, the new, power-hungry Defense Against the Dark Arts professor, frequently punishes Harry.

Harry assembles a new defensive spells club called Dumbledore’s Army. Meanwhile, Harry is tormented with visions seeing into Voldemort’s mind. In one, he sees Sirius kidnapped and tortured at the Ministry of Magic. Harry goes to save him, but the vision was a trick, planted by Voldemort. Sirius is killed in the ensuing battle.

Later, Dumbledore tells Harry about the prophecy of his birth; either Harry or Voldemort must ultimately kill each other.

Harry Potter and the Half-Blood Prince

Harry finds an old annotated Potions book previously owned by someone called the “Half-Blood Prince”, who is later revealed to be Professor Snape. Harry and Ginny Weasley fall in love and begin a relationship.

Elsewhere, Draco Malfoy successfully plans an attack on Dumbledore. Unable to kill him, Severus Snape steps in and commits the murder instead. After Dumbledore’s death, Harry vows to leave Hogwarts to find and destroy the other Horcruxes.

Harry Potter and the Deathly Hallows

During the last stand at the Battle of Hogwarts, Severus Snape reveals he’d been in love with Harry’s mother, Lily, and had been acting as a double-spy, working for Dumbledore, ever since her death.

Harry sacrifices himself to Voldemort, but doesn’t die, as he had been a Horcrux. Neville Longbottom destroys Nagini, Voldemort’s snake. With the other Horcruxes now destroyed, Harry finally kills Voldemort. Friends are lost, but the wizarding world is safe.

Harry (now aged 37) and Ginny, and Ron and Hermione watch as their children board the Hogwarts Express. 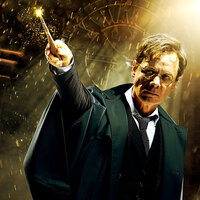 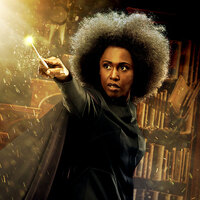 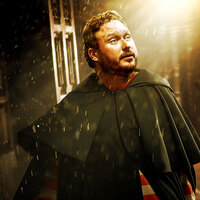 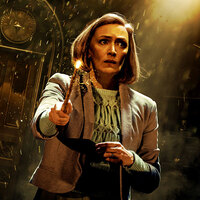 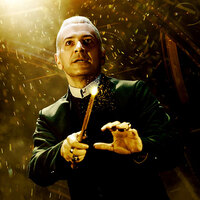 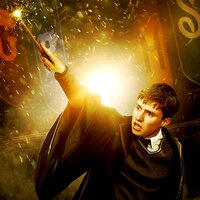 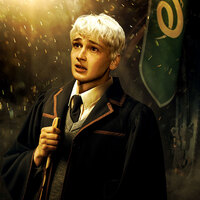 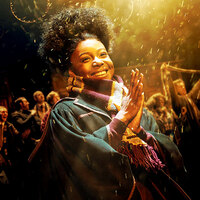 Harry Potter and the Cursed Child
Now On Stage