The Studio 180 Production of Oslo

Use of strong language. Limited smoking onstage. Some haze. 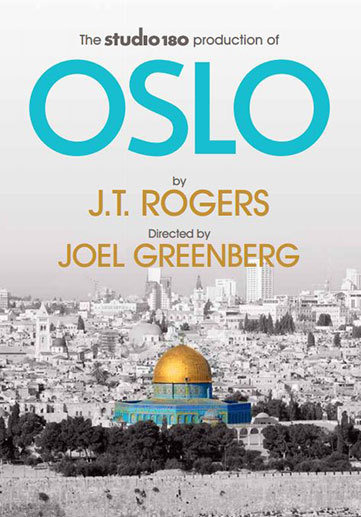 The Studio 180 production of OSLO
By J.T. ROGERS
Directed by JOEL GREENBERG

In 1993, in front of the world’s press, the leaders of Israel and Palestine shook hands on the lawn of the White House. Few watching would have guessed that the negotiations leading up to this iconic moment started secretly in a castle in the middle of a forest outside Oslo.

Inspired by the true story of the back-channel talks, unlikely friendships and quiet heroics that led to the Oslo Peace Accords, Oslo is a deeply personal story set against a complex historical canvas, a story about the individuals behind world history and their all too human ambitions. At this cultural moment when finding common ground is paramount, "Oslo gives us hope" (Daily News).