Recommended for ages ten (10) and up. Babes in arms or children under the age of two (2) are not permitted in the theatre. 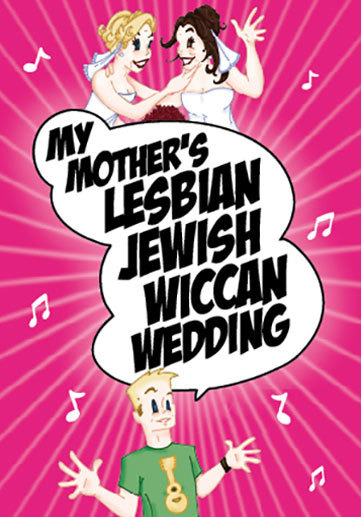 A limited number of standing room locations may be available at only $25 each ($5 ticket service charge will be applied for online/telephone sales). Location is subject to availability. Tickets are available online, by phone and in-person at the Royal Alexandra theatre box office.

In July 2009, in the backroom of a narrow Kensington Market shop, a group of enthusiastic actors and musicians premiered a show at the Toronto Fringe. The show had a quirky title that immediately got it attention. When the first audiences saw it, they knew they were witnessing something unique from writers who had a very promising future. The show became a Fringe sensation. Four months later David Mirvish presented a longer vision of the show at the 700-seat Panasonic Theatre (now the CAA Theatre), where it ran for 11 sold-out weeks.

My Mother’s Lesbian Jewish Wiccan Wedding is a dual coming of age story. It’s the musical memoir of a son whose mother has a major life change. After Saskatchewan residents Claire and Garth divorce, she is offered a new job in Ottawa, forcing her to leave her young son behind until she settles down in her new life. Little did she know of the seismic changes that would soon follow. She discovers her Judaism, and she falls in love with a woman who turns out to be a Wiccan.

It’s the sort of story that is too good to be fiction, as it examines the last few decades and the major societal shifts that happened.

Filled with irresistible songs, warm humour, unusual characters and situations, My Mother’s Lesbian Jewish Wiccan Wedding is that rare musical that comes from left field yet finds its way into everyone’s heart.