Some use of strobe lights and haze. Recommended for ages 12 and up. Babes in arms or children under the age of two (2) are not permitted in the theatre. Children older than two (2) should be able to sit quietly in their own seats throughout a performance. 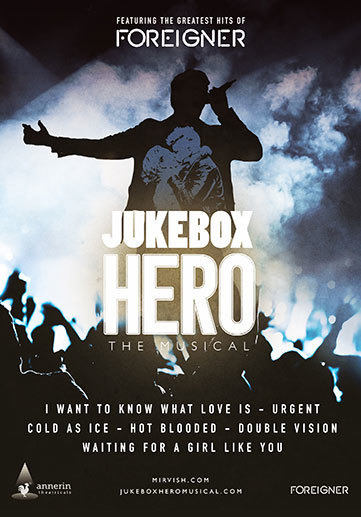 An original musical by the prolific writing duo, Dick Clement and Ian La Frenais (responsible for the films The Commitments and Across The Universe, and the TV programme The Tracey Ullman Show), Jukebox Hero is a coming-of-age saga written to the music of FOREIGNER. This new Canadian production will be directed by Randy Johnson (the playwright and director of the Tony Award-nominated Broadway production of A Night With Janis Joplin), with musical direction by Mark Camilleri (musical director for the Toronto engagement of Dr. Seuss’s The Lorax).


Jukebox Hero will feature 16 iconic Top-30 Foreigner hit songs, such as I Want To Know What Love Is, Cold As Ice, Waiting For A Girl Like You, Hot Blooded, Jukebox Hero and Urgent.