Graeme Of Thrones The Parody 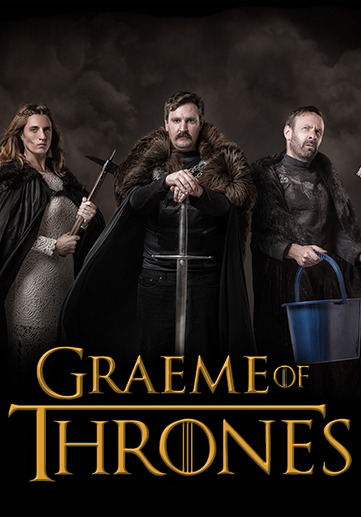 In this critically-acclaimed theatrical journey through the Seven Kingdoms, direct from sold out shows in London’s West End, avid ‘Thrones’ fan Graeme just wants to recreate his favourite fantasy saga on stage - aided and abetted by his best friend Paul and the girl he used to fancy at school - Bryony. He doesn’t quite have the same budget as the TV show, or as many cast members, or the performance skill required, but he’s sure George RR Martin would approve – and that’s what matters. But when news reaches them that an influential theatrical producer is in the building, Graeme decides that this could be his big break - as long as nothing goes wrong...

Created by the UK’s top comedy writers, Graeme of Thrones is an original and un-authorised parody on the international phenomenon that is Game of Thrones. A treat for fans and an introduction for the unenlightened.