This production contains the use of theatrical haze and strobe effects. Strong language/subject matter. May be inappropriate for ages twelve (12) and under. Children under the age of 4 are not permitted in the theatre. 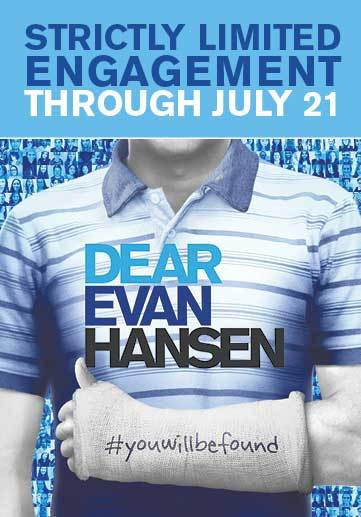 A letter that was never meant to be seen, a lie that was never meant to be told, a life he never dreamed he could have. Evan Hansen is about to get the one thing he’s always wanted: a chance to finally fit in. Dear Evan Hansen is the deeply personal and profoundly contemporary musical about life and the way we live it.
Dear Evan Hansen has struck a remarkable chord with audiences and critics everywhere. The Washington Post says Dear Evan Hansen is “one of the most remarkable shows in musical theatre history.” The New York Times calls it “a gut-punching, breathtaking knockout of a musical.” And NBC Nightly News declares the musical “an anthem resonating on Broadway and beyond.”
Dear Evan Hansen features a book by Tony Award winner Steven Levenson, a score by Grammy®, Tony® and Academy Award® winners Benj Pasek and Justin Paul (La La Land, The Greatest Showman), and direction by four-time Tony Award nominee Michael Greif (Rent, Next to Normal).

Training and empowering thousands of young leaders across every province in Canada to revolutionize mental health.

Be There is an online resource to learn how to support someone who is struggling with their mental health. Get started at BeThere.org