75 minutes (no intermission) followed by a 15 minute talkback session.

TALKBACK - We invite you and your guests to stay in your seats after the show for a Q&A with the cast. These talkback sessions are always popular and provide context and more information about the play. 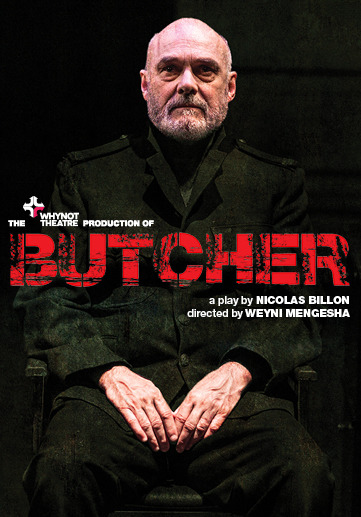 WARNING: Depictions of extreme violence and coarse language. Who is the Butcher? A mysterious old man is dropped off at a police station, wearing a foreign military uniform, and a Santa hat, with a meat hook dangling around his neck. As a lawyer, a police officer, and a translator struggle to unravel the truth, they uncover a past that won’t stay buried, and a decades old quest for justice that must be served. Haunted by events a world away, no one is who they seem to be.

Written by the Governor General Award-winning playwright Nicolas Billon, Why Not Theatre’s production of BUTCHER made its Toronto premiere this past season to audience and critical acclaim.