THE ILLUSIONISTS - Live From Broadway (2016)

The Grand Illusionist, Canada’s own Darcy Oake: Over 200 million viewers tuned in to see Darcy Oake’s electrifying performance on Britain’s Got Talent and America’s Got Talent. The newest member of The Illusionists has grabbed the world’s attention with death-defying escapades, nail-biting feats and classic sleight of hand techniques. The master magician

The Manipulator, Yu Ho-Jin: Considered a rising superstar in the world of magic; Yu Ho-Jin was recently named the 2014 “Magician of the Year,” by Academy of Magical Arts and was the first Asian to win the Grand Prix at the Fédération Internationale des Sociétés Magiques, also known as the “Olympics of Magic.”

The Anti-Conjuror, Dan Sperry: Described as Marilyn Manson meets David Copperfield, Dan combines the art of magic with the macabre and is one of the top-10 most Googled people, thanks to a legendary “America’s Got Talent” appearance. · The Trickster, Jeff Hobson: is the epitome of glamour and showmanship. Don’t be fooled by his innocent appearance; Jeff has audiences laughing long after the curtain goes down.

The Escapologist, Andrew Basso: Italy’s star escape artist, Andrew considers Houdini his hero and is fast becoming one of the world’s most popular illusionists. He is the only person in the world to perform Houdini’s famous Water Torture Cell with absolutely no covers.

The Inventor, Kevin James: known for innovative illusions, is an inventor, comedian and collector of the strange and unusual. Kevin is one of the most prolific inventors of magic in the world and has created some of the most celebrated illusions of the last century.

The Deductionist, Colin Cloud: Colin Cloud is the best and maybe even the wisest man you’ve ever known. Cloud has performed for professional sceptics like Penn and Teller. He has wowed the hard-to-please Simon Cowell. He has certainly left people convinced that he does indeed have mystical skills of reading minds and influencing outcomes. 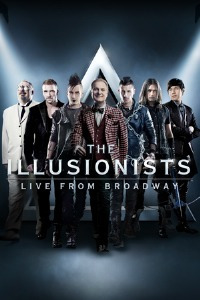