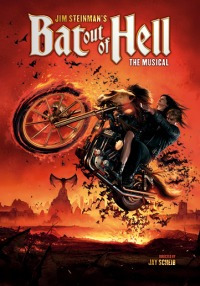 3 Weeks Only! BAT OUT OF HELL THE MUSICAL features Jim Steinman and Meat Loaf’s Greatest Hits: Dead Ring for Love, Two out of Three Ain’t Bad, Paradise by the Dashboard Light, I’d do Anything For Love (But I Won’t Do That), and Bat Out Of Hell.