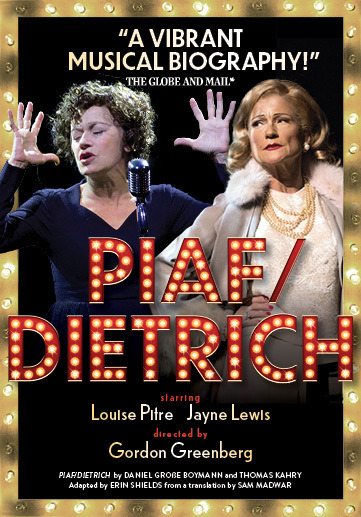 Toronto Premiere
Edith Piaf and Marlene Dietrich were two of the greatest names in international show business during the early 20th century. The first of them enchanted the world with her singing, her moving life story, and unostentatious appearance, while the other did the same with her beauty, elegance, and bewitching stare, being one of the first European actresses to become popular in Hollywood.

Based on a true story, Piaf/Dietrich is a musical drama that explores the intimate and entertaining portrait of a fascinating friendship between show business legends that began under the most unlikely of circumstances and lasted their entire lives.

Featuring 20 of their unforgettable hits including La Vie En Rose, Milord, and Where Have All The Flowers Gone, and starring two of Canada’s leading actors, this will be an unforgettable theatrical experience.