Contains loud noises, some violence and the use of e-cigarettes. 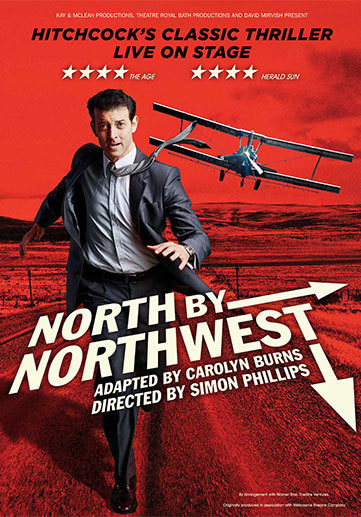 Every twist, every thrill, every hairbreadth escape from Alfred Hitchcock's supreme comedy of suspense is retained for this stunning new stage adaptation from director Simon Phillips (Priscilla Queen of the Desert).

Roger O. Thornhill is a suave and successful advertising executive, abducted by thugs who insist he is a man called George Kaplan. There's obviously been a mix up. When they don't believe him, that's infuriating. When they try to kill him, that's frightening. And when they pin a murder on him, that's time to run!

From New York to North Dakota, Thornhill is chased by spies, Feds, crop-dusting planes, and the inevitable cool blonde. Years before the James Bond films there was NORTH BY NORTHWEST–a  lightning-paced thriller that mixes glamour with espionage for a truly irresistible cocktail. This is an unmissable theatrical spectacle, where the magic of film and theatre collide live on stage.