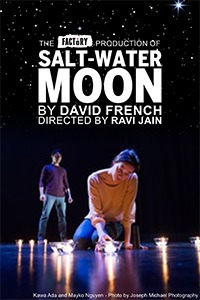 DAVID FRENCH’S SALT-WATER MOON premiered at Tarragon Theatre in 1984 as part of the semi-autobiographical Mercer Family Cycle . Although written over a decade after the first Mercer play, it takes place early in the Mercer family chronology and depicts the tender and tumultuous courtship of Jacob Mercer and Mary Snow . The play won the Dora Mavor Moore Award for Outstanding New Play, the Canadian Authors Association Literary Award for Drama, the Hollywood Drama-Logue Critics’ Award, and was a finalist for the 1985 Governor General’s Award for Drama . Salt-Water Moon has received hundreds of productions around the world since its premiere, including a French-language translation by Antonine Maillet, which has been produced across Canada.