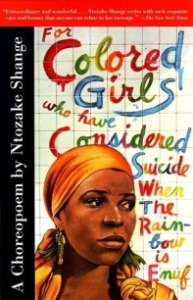 For Colored Girls Who Have Considered Suicide When the Rainbow Is Enuf by Ntozake Shange tells the stories of seven women who have suffered oppression in a racist and sexist society. A unique blend of poetry, music, dance and drama called a “choreopoem,” it “took the theatre world by storm,” noted Jacqueline Trescott in the Washington Post. A hit on Broadway, it played at the Royal Alex in March 1978.