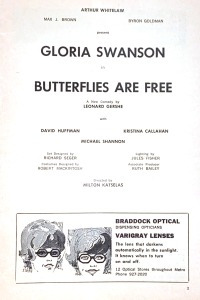 Gloria Swanson was one of the biggest film and stage stars of the 20th century. She began on stage and in silent movies. Her career was revived by the film Sunset Boulevard, which was almost the story of her life. That film gave her new popularity. She played the Royal Alex three times – 1942, 1946 and 1971. Butterflies are Free was her final appearance at the theatre.