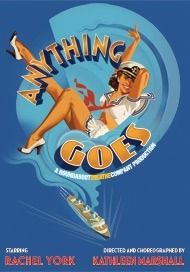 ALL ABOARD for this saucy and splendid production of Roundabout Theatre Company’s ANYTHING GOES, winner of three 2011 Tony Awards® including Best Musical Revival and Choreography! One of the greatest musicals in theatre history, Cole Porter’s first-class musical comedy is sailing to Toronto, starring critically-acclaimed actress Rachel York as Reno Sweeney and directed and choreographed by Tony Award® winner Kathleen Marshall. The New York Times calls it “MUSICAL-COMEDY JOY” and USA TODAY hails it as “GLORIOUS and EXHUBERANT!”

When the S.S. American heads out to sea, etiquette and convention get tossed out the portholes as two unlikely pairs set off on the course to true love…proving that sometimes destiny needs a little help from a crew of singing sailors, an exotic disguise and some good old-fashioned blackmail. Peppering this timeless classic are some of musical theatre’s most memorable standards, including “I Get A Kick Out Of You,” “You’re the Top,” and of course, “Anything Goes.” Don’t miss what the AP exclaims as, “So DELIGHTFUL, So DELICIOUS, So DE-LOVELY!”