As the Public Ticket On Sale Nears,

HARRY POTTER AND THE CURSED CHILD 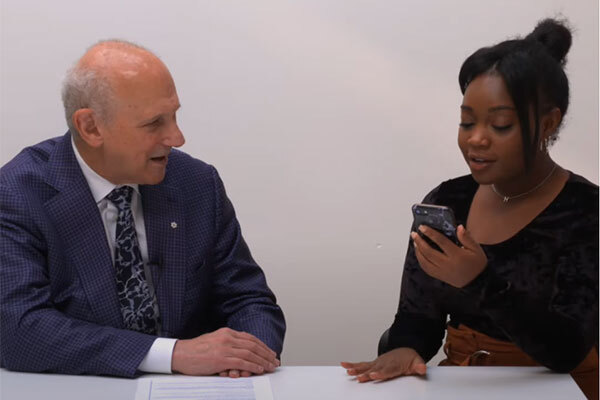 Tickets to the Canadian premiere production of the world’s most award-winning new play, Harry Potter and the Cursed Child, will go on sale on December 1st, so local producer David Mirvish thought it was about time he got into the spirit of the show and was “sorted” into one of the famous houses of Hogwarts School of Witchcraft and Wizardry.

Last week, with the assistance of one of the show’s stars – Hailey Lewis, who will play Rose Granger-Weasley in Toronto – David used the Harry Potter Fan Club app and allowed the Sorting Hat to determine which house he belongs to, something that every student of Hogwarts experiences when first entering the school.

“My children were sorted into Hogwarts houses long ago,” explained David. “I had no excuse to not do the same, especially as we are gearing up for the production here.”

Of course everyone knows that there are four Hogwarts housed: Gryffindor, whose students are known for their bravery and chivalry. Hufflepuff stands for hard work, patience, loyalty and fair play. Ravenclaw house espouses intelligence, knowledge and wit. And Slytherin is recognized for ambition, heritage and resourcefulness.

Which house did the Sorting Hat choose for David?

You’ll have to watch this short video that documents David’s sorting to find out.

“I had great fun doing the sorting ceremony,” said David. “It’s a splendid way of entering into the magical world of Harry Potter and preparing for the Canadian premiere of this truly magical show.”

If you haven’t had the Sorting Hat do the honours for you, it’s not too late.  Simply download the free Harry Potter Fan Club app or go to wizardingworld.com and take part in the official Hogwarts Sorting Ceremony now.