I’ve had a lot of openings in my life and this is probably the most overwhelming experience. - actor Lisa Horner

The reopening of “Come From Away” in Toronto began with a two-way standing ovation.

When the cast came onstage Wednesday evening for the opening number, “Welcome to the Rock,” the audience jumped to their feet cheering and clapping, and the actors applauded back. The audience also gave a sustained round of applause for the midshow party sequence “Screech In.” There was yet another standing ovation during the curtain call.

This was the first public performance of the hit musical since COVID-19 shut down public gatherings in March 2020.

The experience was “unbelievable,” said actor Lisa Horner after the show. “I’ve had a lot of openings in my life and this is probably the most overwhelming experience. I tend to be pretty focused, but I wanted to bawl from beginning to end.”

Emotions were high — and mixed given the Ontario government’s announcement earlier Wednesday of 50 per cent capacity limits on public gatherings of more than 1,000 people. Ticket holders to the opening had the option of attending or taking a refund, exchange or credit. 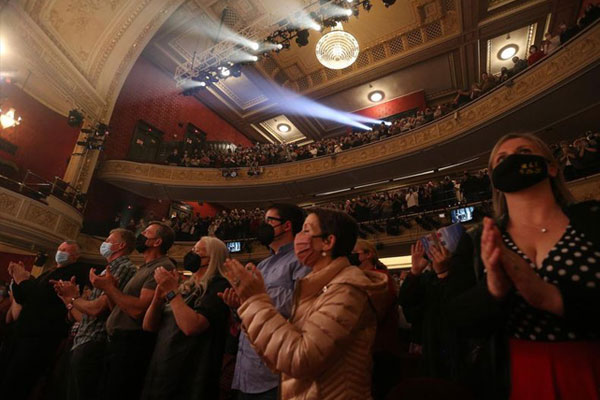 Speaking from their seats in the theatre before Wednesday’s performance, audience members Jessica and Sean from Hamilton said they were aware of rising COVID numbers, but that hadn’t kept them away. They had seen “Come From Away” three times before, twice in Toronto and once in New York, and chose to buy tickets for this reopening night performance to “welcome theatre back,” Jessica said.

Proof of vaccination and ID are checked as audience members enter the theatre, and masks are required throughout the performance. The show does not have an intermission, and there are no drinks or food on sale, which also lessens risks.

“With vaccination requirements being what they are and everyone’s wearing a mask, at some point in time you’ve got to get back to normal,” said Sean.

“I almost cried twice, just being back in the theatre,” said Jessica. “I have always found this show very emotional and emotionally connecting.”

It had been 643 days since the show was last performed at the Royal Alexandra Theatre. The Toronto staging is the last to reopen among the four productions of the show currently playing worldwide. “This was so long in coming,” said co-creator Irene Sankoff in a post-show interview.

The musical recounts real-life events in Gander, NL, in the days after Sept. 11, 2001, as Newfoundlanders welcomed passengers and crew from 38 planes grounded after the attacks on the World Trade Center and Pentagon.

“The people in Gander and on those planes could have locked themselves inside, but instead they were good to each other,” said co-creator David Hein. “And that’s how we’ve survived this. Sometimes by locking ourselves inside, but also masking and vaxxing, and taking care of one another. Because we did that, we get theatre; we get to do this again.” 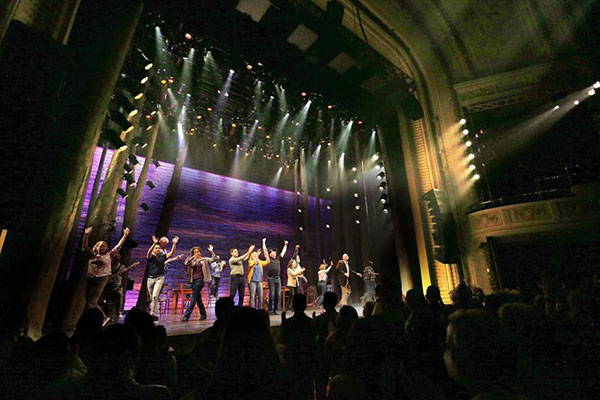 During the COVID hiatus, cast member Horner retrained as a personal support worker and will continue to do this work part-time during the show’s run.

“It really gave something to my soul and I came back with a fresh perspective,” said Horner. Her principal role in the show is Beulah, the motherly figure who welcomes stranded passengers to a makeshift shelter at Gander Academy. Her work in a caring profession has given Horner a new outlook on her character.

“I have a more centred sense that being there for people doesn’t necessarily mean physically doing stuff. Sometimes it’s a more quiet, silent comfort.”

News of the new restrictions did not dampen the passion onstage nor in the audience. But John Karastamatis, Mirvish director of sales and marketing, said he would have appreciated the government giving more notice or consulting with Mirvish Productions.“But I guess COVID doesn’t consult anybody,” Karastamatis said. Mirvish can control the capacity of the 1,200-seat Royal Alexandra by closing its top-level balcony so that only 950 seats are on sale and will do this as restrictions continue.The new restrictions will affect “Come From Away” and the other large-scale musical currently playing in a Mirvish theatre, “Jesus Christ Superstar.” Mirvish is emailing ticket holders to give them the choice of attending, getting a refund, exchange or credit for a future performance. If audience numbers at any performance do not drop below 1,000, Mirvish will contact ticket holders and work to accommodate them.David Mirvish called the news of capacity limits and rising infection numbers disastrous, while stressing that COVID protocols can keep everyone safe.“People have to exert every caution. Anyone who is not getting vaccinated is behaving irresponsibly toward their neighbour,” said Mirvish. “When we had no vaccines to protect us we wore masks, and when we wore masks we didn’t get sick. We have more tools than we had when we started to fight this battle and we will prevail if we behave in a sensitive way.”Cast member James Kall, whose principal role is passenger Nick, said he felt “incredibly safe and thankful” to Mirvish for its adherence to COVID protocols. Meeting the “Come From Away” fan base again through this reopening performance lived up to his high expectations, Kall said.“There are no words … this one will stick with me.”