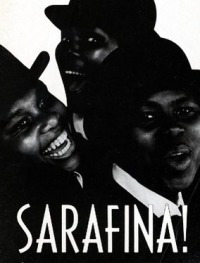 Sarafina! is a South African musical by Mbongeni Ngema depicting the student uprising against apartheid in Soweto told from the point of view of an ambitious school girl actress-activist named Sarafina. It had its Canadian premiere at the Royal Alex in September 1990.

The creation of the musical was chronicled in the documentary film, Voices of Sarafina! A film adaptation was made in 1992 starring Whoopi Goldberg and Leleti Khumalo.