Ain't Too Proud: The Life and Times of the Temptations

Book by Dominique Morisseau
Based on the Book Entitled The Temptations by Otis Williams with Patricia Romanowski. 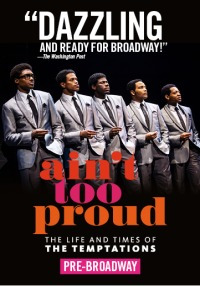 Ain’t Too Proud: The Life and Times of The Temptations played a sold-out run at the Princess of Wales Theatre October and November 2018 before transferring to Broadway in 2019. Written by  Dominique Morisseau, directed by Des McAnuff and choreographed by Sergio Trujillo (2019 Tony Award for Best Choreography), the musical tells the sometimes tumultuous story of how a group of young men became one of the biggest musical acts in history, while at the same time exploring the personal and political conflicts that threatened to tear them apart as the United States fell into civil unrest.